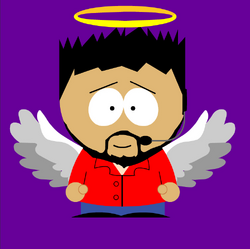 Rappy, also known as Rappy 4187, is a member of Wikia's collection of staffs. He is not a stick, this confuses people. He does, however - edit consistently on Aion Wiki and claims to be 41 years old.

You came here for The Truth? Well, here's The Truth. Rappy is secretly an immortal being of the age of 3,000. This being is one of the many in the species Rappy; this one branded as Rappy number 4187. The Rappy species are an intelligent group of skeletal masterminds. That keyboard you're typing on right now? Yup, that was made by a Rappy.

An identifying feature of a 'real' Rappy response is the clear use of Upper case to start sentences, and liberal use of punctuation. As well, Rappys will not tolerate spelling or grammatical errors, tending to immediately edit and repair such abominations.

Rappys are responsible for everything. The species has the ability to affect outcomes. Should something go wrong, it is always a Rappy's fault. No matter who did anything, a Rappy was behind it. Rappys are also known to carry around infinite amounts of money. They are very stingy, but have the money. If you ask a Rappy enough times (~50 times a day for a week), they may finally give in and give you their money. Should you ever make a bet, Rappys are the ones who have to pay the debt.

Rappys exist only to mine data and better their kind. Do not accept help from a Rappy as it will only lead to a total system failure. The Rappys' biggest weakness is their response delay. The average response time of a Rappy is typically 2 hours. Should someone try and ask for Rappy, use the two hours to get away or find yourself cornered. If you should find yourself cornered by a Rappy, remain calm and pretend that you understand what it is saying. So, remember to ask someone better, like this n00b, about your technical issues; he might respond in a manner you may understand.

Rappy #4187 has used the nowiki tag, which is part of the conspiracy of Wikia inc. to remove the word wiki from the dictionary and replace it with Wikia.

But, ever notice the threads of conspiracy that run through the "historical" account?

No matter. In any version of these stories, actual personal information on the three men sent on their trek is not given. Vague ideas, maybe, but nothing is ever said about The Truth regarding the wise men.

It turns out that the Magi, these "men", were actually Rappys and possibly even some of the first of their kind to visit Earth. Although their lifespans remain unknown, it has been determined that they can live for at least a few thousand years. It is very possible that the wise men were indeed Rappys — as well as several other prominent biblical personages. However, there are only a few records of those times, so it's difficult to ascertain if there were truly Rappys amongst the higher ranks of nobility. Nonetheless, this all begs the question:

Were Rappys sent to Earth to watch over us, to guide us, on the road to humanity's adulthood?

The only Rappy currently known to mankind — #4187 — refuses to comment on inquiries regarding the Three Magi.

It is theorized that The National Enquirer, a U.S. weekly magazine founded in 1926, has a connection with the Rappy species, or more specifically the 4,187th Rappy. By posing as a tabloid, the publication enables the Rappy to get closer to celebrities of nearly any kind.

Rappy #4187 is known for his elusive secrecy, but has let slip his "location," or at least the location written on government documents (though burned after inspection). Not surprisingly, the Rappy is in the same state where The National Enquirer is located.

Given this information, the only inference possible is that, while seemingly employed as a "reporter", #4187 is in fact the National Enquirer itself. In his guise as a so-called reporter (not unlike that other alien, Clark Kent), Rappy finds and/or steals any and all information regarding The Truth, which he subsequently shares with his Rappy brethren. The Truth is then sold to big businesses and other members of the capitalist movement.

Retrieved from "https://itsaconspiracy.fandom.com/wiki/Rappy?oldid=6633"
Community content is available under CC-BY-SA unless otherwise noted.