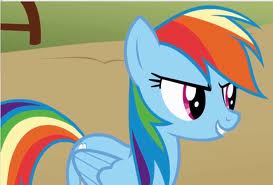 Rainbow Dash is a cute and cuddly hardcore awesome pegasus pony from the much loved TV show My Little Pony Friendship is Magic. Innocent looking at first, she is actually a tomboyish and loudmouthed character, often willing to do the more dangerous things around Ponyville and not being afraid to brag about her flying prowess. She's also a good friend and being the representation of the Element of Loyalty, she never leaves their side. Rainbow Dash remains a consistently popular character within the fandom.

Surely nothing bad could come out of Rainbow Dash. She's good-hearted, helpful, and funny. But you would be surprised as to the consequences of being in contact with Rainbow Dash. Besides becoming a brony (or brolrus). Or maybe you aren't as cool as that.

Rainbow Dash is actually the god of the walruses. This has only recently been proven in the snapshot below, where three notable walruses changed their avatars to Rainbow Dash, most likely in order to show faith in their god:

Not only does this show that Rainbow Dash is the deity of all walruses, it also somewhat proves that she must be the worst pony, since she is worshiped by walruses.

So there you have it. Bronies and non-bronies alike, you may sleep easy tonight, knowing the truth about the much loved and equally hated Rainbow Dash. Or maybe you won't sleep easy tonight, knowing that your favorite pony, or most hated creature on earth, is in fact a deity only worshiped by walruses, and by thinking about her, you are slowly becoming a walrus yourself.

Retrieved from "https://itsaconspiracy.fandom.com/wiki/Rainbow_Dash?oldid=6655"
Community content is available under CC-BY-SA unless otherwise noted.