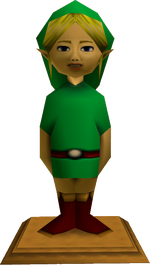 BEN is a seemingly harmless Elegy Statue that appears in The Legend of Zelda: Majora's Mask. BEN appears alongside three other unnamed Elegy Statues, all in the shape of one of Link's forms. These statues only appear in the area of Ikana, that'd make sense though, since Ikana has gone through many years of bloodshed.

The Truth is that BEN is secretly in your cartridge of Majora's Mask. You think you're safe, but you really aren't. When you think everything is fine, you'll find out that it isn't. You'll be in Ikana, you'll play the "Elegy of Emptiness", and bam, you're shit out of luck.

You shouldn't have done that...
Retrieved from "https://itsaconspiracy.fandom.com/wiki/BEN?oldid=5871"
Community content is available under CC-BY-SA unless otherwise noted.